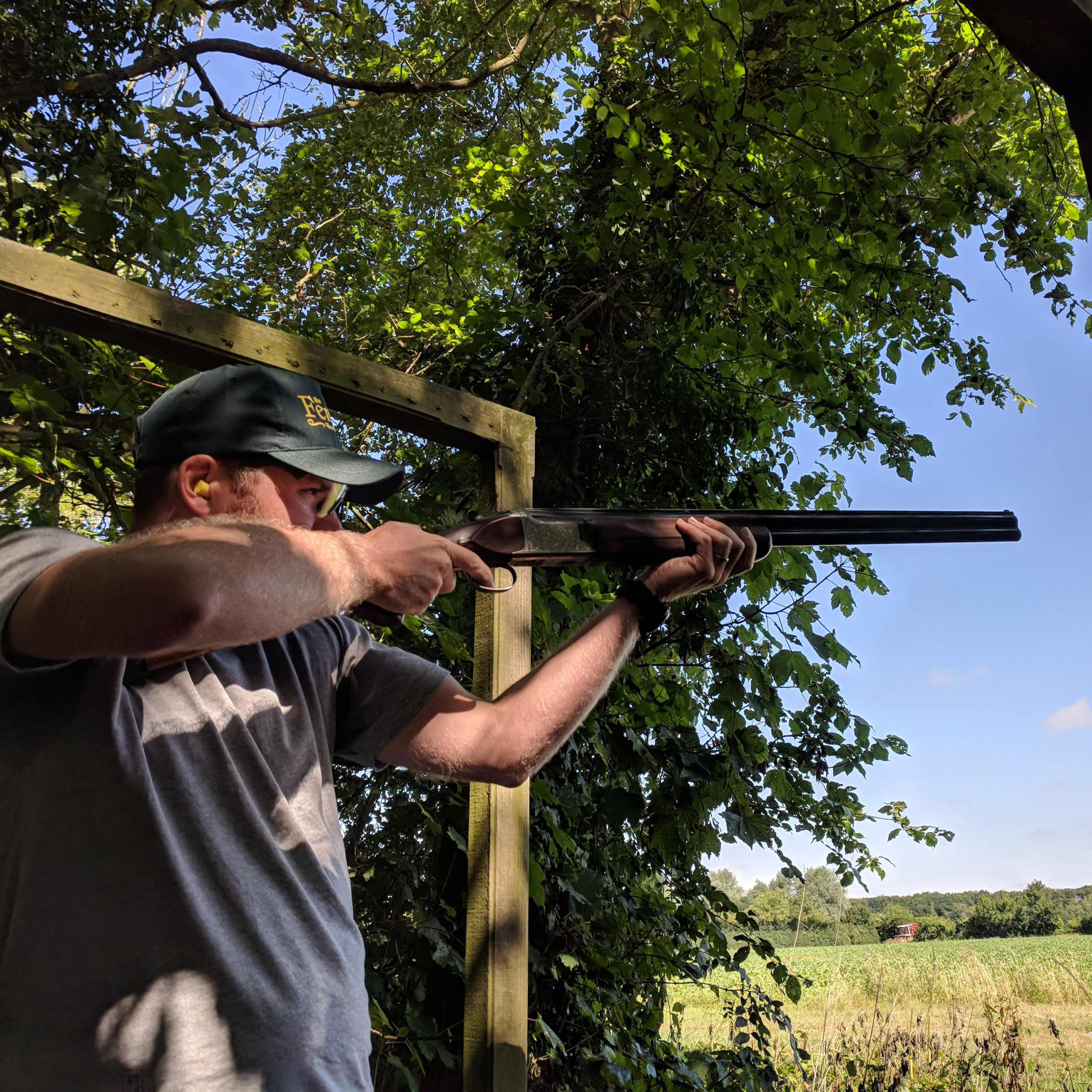 There was some anticipation when Friday the 13th was chosen for the annual Pelican away day, and that our team, most of whom had never shot a gun before, were going on a clay pigeon shoot. The location was the Fennes Shooting School, near Braintree, and when we arrived the sun was already starting to heat things up. We were greeted with tea, coffee, bacon rolls, plus hats and earplugs, which we were told must be worn. Fiona, one our directors, had decided not to participate, but her mind was changed by the smooth talking instructor Kevin who assured her that the activity was indeed suitable for all. We all had to declare which was our dominant eye, and co-ordinate this with our dominant hand. This was done by holding our fingers up to a distant mast, and the dominant eye was found depending on the position of your finger with one eye shut. It was quite a surprise to some, personally it was something I had never considered. A few of us were presented with a problem when their dominant eye was opposite to their dominant hand. If this was the case then the dominant eye took priority, which meant some right-handers had to shoot with their left hands. We also had to estimate how many of our collective 500 shots would be hits, and we all estimated fairly low. We were led to a small wood, with shooting stalls, and presented with our guns. I was handed a large 12 bore shotgun. I have never been that close to a gun before! We were divided into teams, and Mike from the CGI department was encouraged to go first, as he was the only one of us with shooting experience.  Even with earplugs in, the first bang was startling enough, and the shot was accompanied by a smell from the spent cartridge reminiscent of fireworks. Mike was impressive, and got a large hit rate, further adding to the expectation as I stepped forward to take my 10 shots. The gun felt pretty heavy and I was told to wedge it into my shoulder firmly, and put my head right down to look down the barrel. To my absolute surprise, I hit the first 7 shots, despite being slightly overawed by the power of the gun. My only misses came when a different clay was used, on a different trajectory. These alternative flightpaths meant having to aim the gun slightly ahead of the target, which added to the complication. It’s hard to put into words how satisfying it is when a shot that you’ve fired connects with a moving target and blasts it out of the sky, and the excellent instructors at the Fennes Shooting School know exactly how to coax the best shooting out of you. The ladies in our party went next, and as they each had many more hits than misses, we quickly realised that our estimations on the overall hit rate of the day were far too low, and Fiona who had been very reluctant to take part was pleased that she hit a good number too. Account manager Layla missed quite a few in a row before she realised she was closing the wrong eye. Instructor Kevin rectified the problem by fashioning her an eye patch made of cardboard.

After shooting in the woods, we were taken to shoot ‘rabbits’. Happily, these were not real rabbits (I’m sure a few of us would have had some reservations on taking part if they were), but bright  orange clays fired across a shooting range. I felt these were much harder to hit than the airborne ones, with the added complication that they would unexpectedly hit a bump and jump into the air. This did not phase ace shooter CGI artist Ben, who after struggling to find his targets earlier on, hit 8 out of the 10 shots. Once we had all shot our 50 shots, it was time to tally up the scores and announce the winner! Oli, head of CGI, hit the most with 39 out of 50, a very impressive hit rate. His reward was to have an extra shot at a very high clay that was fired out from the top of a high mast. He managed to hit it first go, obviously a natural with a gun! There were exciting play offs to decide the final rankings involving the 2D team and the account managers, then it was all wrapped up in time for a pub lunch, where Oli received his sharp shooter’s trophy.