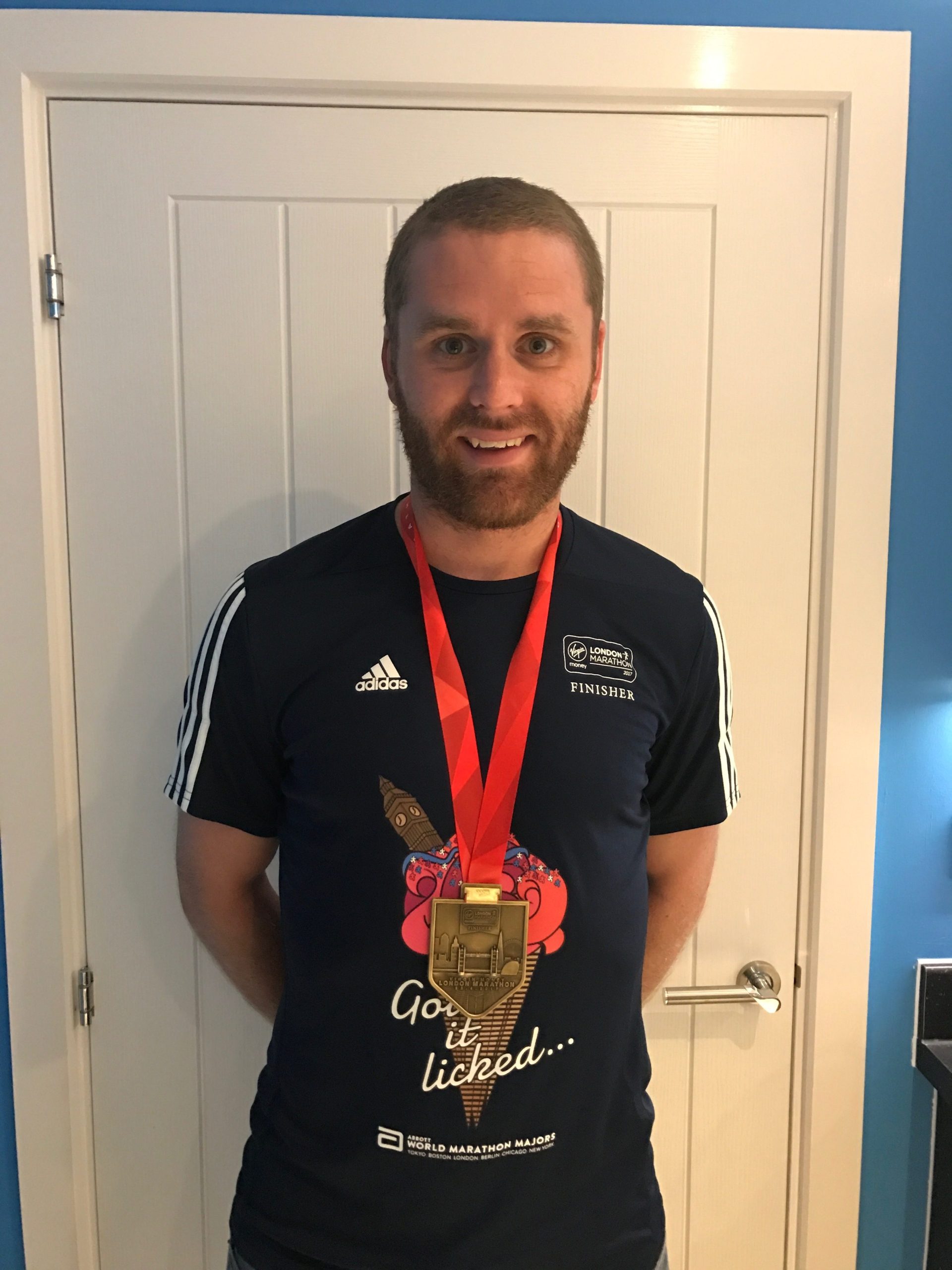 So, after applying for the London Marathon for the last umpteen years, I had finally given up. The public ballot was not giving me any luck and in my head I had surrendered the idea of ever getting the opportunity. That was until Craig, our Installation Engineer, wheeled over to my desk 12 weeks before the marathon and showed his Facebook news feed to me. On it was St Helena Hospice appealing to people to call them as they had a last minute marathon place due to one of their runners pulling out because of injury. The post was 12 minutes old and my initial reaction was to right the number down, dart out of the office and call them. A friendly voice at the other end of the phone told me I was the first person to call and that I could have the place in the London Marathon if I wanted it.

The drawbacks — train from a basic level of fitness due to playing football, to marathon man in less than 12 weeks, and raise a whopping £1,800 in the process. I had until 11am the following day to decide if I wanted to take the challenge on. Cue an evening of serious conversation with my wife and a fairly sleepless night. I got into work the following morning and sent the email…I’m in. I knew it was going to be tough in both training and raising that amount of money in such a small amount of time, but ultimately it was an opportunity that if I had declined, I would have regretted for the rest of my life.

So this was the start of the journey of something I had wanted to do since I was in primary school. There I sat in school assembly about 7 years old listening to the school secretary tell us about how she had defied all odds and ran 26.2 miles in the London Marathon. I was a bit of a handful in my younger days (to put it mildly) but on this particular day I gave up being the class clown and was transfixed by this lady telling us about the dedication and will power needed to succeed in such a feat. As she spoke with the medal proudly round her neck, I thought to myself ‘I’d love to give that a crack one day’

I knew the training was going to be tough but not as tough as it turned out to be. With the nagging thought of not really having enough time to train to my full potential I pushed myself to the limit on every single run (within reason) no ‘easy runs’ for me. Sticking to a schedule as I did, helped build my fitness at the right level so that I avoided injury and I also had a sports massage once a week to try and help my tired muscles recover more quickly. My pace was very good for a novice and had been averaging between 8 and 9 minute miles. My aim was to run the marathon in sub 4 hours, which was a tall ask being the first marathon I have ever run and that would put me in the top 25% of all marathon runners. I’m not ignorant enough to think that there wouldn’t be obstacles along the way, but there had to be an aim. I ran my longest training run 3 weeks prior, which was 22 miles in 3 hours and 5 minutes. Then the tapering began before the big day!

Now onto the largest and most important reason for my decision to run – St Helena Hospice. If I’m being totally honest, I didn’t know a great deal about the charity before I took the marathon place, but it’s only when you put it out there sometimes that you realise how a charity like this has helped so many people. Due to the nature of the charity it is obviously not something that would naturally come up in conversation but when people know that you are raising money for such a worthy cause, they are swift in supporting you. When I looked at my monumental target at the beginning, I thought I had little chance in raising that amount by the time the Marathon came around. But with some unbelievable support from my work colleagues, family and friends (including organising a great quiz night and carrying out errands for my work mates — who pushed it a bit to be honest) my target was achieved in that short space of time.

When marathon day came around I was calm but nervous. I had trained to maximum to get my best possible finishing time and I was in the best shape of my life. When I shuffled into my starting pen it began to dawn on me the task that I had ahead of me. Not only did I have a 26.2 mile run ahead of me, but I also had to make my way through a LOT of people to get to the runners at a similar pace to me. My starting pen was second from the back, just in front of the fancy dress runners!

Once the race was underway I started to make my way through the crowds. As each mile ticked by I began to grow more frustrated with my split times being slow and pushed myself harder and harder to try and make the time back up. When I got to mile 20 I felt like I had reached people running a similar pace to me and briefly saw the 4 hour pacer. However, with the large amount of extra energy I used up running in and out of thousands of people (literally over six thousand people)! I hit the infamous wall! That last 6.5 miles was the single hardest physical challenge I have ever put my body through. I was so exhausted that I nearly missed Big Ben! During training I thought a lot about my celebration crossing the line. But my priorities had changed — gone was the energy to raise my arms in ecstasy, I was busier telling myself just to keep my legs moving and not to pass out. I crossed the line in 4 hours 7 minutes and 1 measly second.

It is true what people say about running the London Marathon.  It really is the very best and at the same time the very worst thing you can ever do!